Welcome to The Scribing Room!

The Scribing Room is a new forum designed to focus on the creative world of writing and roleplaying, where members can feel free to roleplay with others, or submit stories of their favorite shows, games, books or movies! Please register to not only post your own works and roleplay, but to also help the staff with ideas on how to turn our new forum into something great!

The ultimate discussion board for fanfiction, roleplay and general writing of every kind!

You are not connected. Please login or register 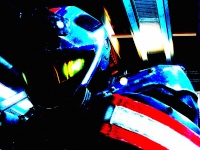 So far, I only have one, who will stick with me until I grow old of Sonic, which will never happen. Allow me to introduce Gears, the slightly irritable Fox mechanic of Mobius!

Features: None other than the hair on his head is slightly lighter, Emerald eyes.

Friends/Family: Gears' family (Just Gears') is all dead, with the exception of my latest character Fears and another brother whom I will not discuss. His friends: Twilight, and many others in the resistance.

Abilities/Powers:
Extremely Intelligent
Adrenaline Fury
- Gears' adrenaline Fury is much like that of Hulk's anger issues, minus the hulking body size. All it merely does is boost his Morale, makes him much stronger, and visually changes him. For example: Gears gets really angry with something and his fur turns a deep grey, teeth stick out more, and his eyes turn deep red.
Over all Power/Ability: Anger

Adrenaline Frustration: Gears takes his enemy, and throws them into the air, warps above them, then delivers a smashing kick to the chest of the enemy, grabs them and corkscrews them all the way to the ground *tires him completely when executed*.

Adrenaline Rush: Runs around the enemy at blinding speeds, creating a tornado, that when the enemy is enveloped with the tornado Gears throws in super sharp cogs, the cogs shred the enemy, by the time the tornado is gone the enemy is defeated.

Adrenaline Ferocity: Gears starts doing a lot of close combat moves, then finishes with a wrench blow to the neck.

* these are what their name says, except they are enhanced by Adrenaline Fury.

Chaos Light: Wielding 4 emeralds causes Gears to cause a Massive attack of light from Solarus. This causes all those that are evil nearby to be eradicated.


- Is the Prophet of Solarus *sees the future when summoned*

Personality: Friendly, Loyal, and funny. He is outgoing and a happy-go-lucky guy. He will always protect those he cares for. He can be quiet, but prefers to be heard. He always seems busy, so he has to always look for fun. He hates being on the media for being a part of the rebellion, he especially hates Jay Sparrow *rip off name of Jay Leno* when he gets interviewed by him.

BackGround: Gears was always a rebel. Since the beginning he was always waiting till the last minute to do stuff. He hates being told what to do, without being politely asked like civil people. He loved his mother and father *victims of robotizing during his teen years* very much, and did whatever it took to be on their "proud of" list. He got the unfortunate experience of watching his father get robotized, and as a torture Robotnik even spared him to live with the guilt of not being able to help. His father's "dieing" wishes he handed a cog to Gears, which had taken the place of the old fox's heart during the robotizing. It was to remember his father. His father also asked that he "Give Robotnik hell." He lives those words, always helping the rebellion foil Robotnik's plans. He invents machines, weaponry, etc. for the rebels.

He is also the prophet of Solarus, meaning that he can see into the future, and stop the bad ones from happening. To this day he has not experienced a "vision" of his destiny. But he still does what he does best; Have fun, Invent, and Kick ***! He resides in KnotHole village, he has yet to find someone.

Weakness: Death. He has always had a soft spot when it comes to death, after witnessing so much of it. But don't be confused, some weaknesses are also triumphant strengths. for example: Gears doesn't like to kill things, unless it is absolutely necessary, however, he will if someone is endangered, or if he's angry enough at someone *I'm talking Infuriated angry, which is hard to do for Gears*.

For when I get the feeling to kick some serious Alien behind, I go to my next character from the Halo series. I have only him so far, but this is one category of characters I'd like to create a lot of.

For now, I introduce the Spartan-II super soldier Blaine!

Performance:
A calm and collected Spartan, who does have a hot temper when angered. He is capable of steady hand-eye co-ordination, meaning he is a strong marksman. Also, due to his bulky build, he is capable of lifting incredibly heavy objects.
He expertly can use close quarter and ranged weaponry. He treats any allies like family, being extremely loyal to his team-mates. He would put them before himself in any firefight.

S-115 is a strong fighter, and dislikes losing battles. He is one who would take one for the team. His armor he loves to wear is his Recon class helmet, with a primary armor color of Red and a Secondary of Blue.

He is a stealth artist, and doesn't show mercy. It is due to these features and his armor configuration that he is called "Hidden Death" He is a huge asset on the battlefield, but does not like to gloat about his abilities on the battlefield.

Blaine is also a mercenary for ONI section III doing odd jobs and assassinations for the Office.

His current location is unknown, despite the rule that dead Spartans are to be listed as MIA, Blaine literally is MIA, but not KIA. He was last seen at the battle for Reach, escorting a package with vital intel to Cpt. Keyes of the Pillar of Autumn. It is unknown whether he died or survived.

Character Biography: Despite the fact that he attempts to look like a gruff mean person, he has a strong heart, and a kind will. He is a resident of Cinnibar Island, his father works for Blaine's Fire Type Pokemon gym. Occasionally he takes a boat between Cinnibar Island and Pallet Town to go shopping for his family. There he is friends with many of the locals, except Gary Oak.

Ever since he first saved his Pichu, who had washed up on shore, he's always wanted to take the Pichu on an adventure to defeat the Pokemon League. He just has yet to tell his father, the only family he has-minus the Pichu.


So far that's all the characters I have! I will make more in the future for more topics and post them here!
Adobe Acrobat.Pro X V.10 Multilingual